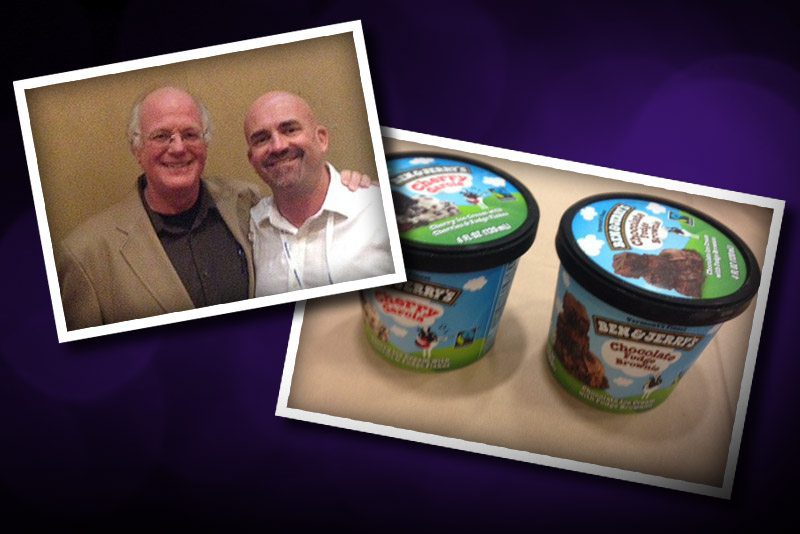 The 3rd Annual Marijuana Business Conference & Expo kicked off with a keynote address by Ben Cohen. Ben is the co-founder of Ben and Jerry’s Ice Cream. Ben began his presentation by admitting that he dropped out of just about every educational college known to man. Ben and his buddy, Jerry Greenfield, were thinking about starting a new company. They did not know what to do. They narrowed down their thoughts to starting an ice cream or bagel business. They chose ice cream. They even stole a business plan from a pizza shop. They just inserted ice cream cone wherever it said pizza slice.

Enrolling in a $5 online course in ice cream making from Penn State (they didn’t even know how to make ice cream) and with only a $12,000 initial investment, they launched one of the most successful brands in history. How did they do it? By staying true to who they are and the things that mattered to them most.

Ben and Jerry wanted a company that not only made a profit, but one that made a difference in their community and eventually a difference in the world. Although they cared about profit, they also cared about their employees. They went to their employees and told them that “from now on, we will use two business measurements for success: 1. How much money we made. 2. How much have we improved the community we are part of.”

They had to fight their board of directors to accept giving 10 percent of their gross revenue to their charity. By comparison, the average large corporation gives less than 1 percent to charity. They also offered people in Vermont a chance to own a “scoop of the company.” One out of 100 Vermont residents took advantage of the offer. Initial investment shares were offered to them at less than $130 per person!

Through the years, Ben and Jerry’s has also purchased brownies for their ice cream from homeless shelter programs. They developed ice cream flavors that supported local farmers and producers around the world (many who are poor). They have created a better place to work, a better community and a better world. They also work tirelessly to lobby for government reform. See www.stampstampede.org.

Ben believes businesses should have a social value system, not focus only on profit. That is often easier said than done. Ben suggested the best way to accomplish this is to define your social business values and put them first. “In order for values to end up in the right place in your business, they need to begin in first place.”

Most companies are not concerned with giving back to the the community. If they donate money, it is simply to throw money at causes so they feel better about themselves. Ben said, “Pillage and rape and throw a couple of coins at the masses, that is the very bottom of what businesses can do.” He continued, “Make money and help improve quality of life in your community. Or make money only. You pick!”

I have carefully studied the attributes of some of the most successful business people of our generation. Whether it is Steve Jobs (Apple), Howard Schultz (Starbucks), Tony Hsieh (Zappos) or Mark Cuban (Technology), they all share one thing in common. They want to make a difference in the world and they also care about the community around them.

Check out Simon Sinek’s website Start With Why if this business approach inspires you.

What Marijuana Business Owners Can Learn From Ben

Current marijuana businesses could learn from Ben Cohen. Remain approachable. Don’t take yourself too seriously. Think about what you can do for others. Plan ahead. Just because you are first does not mean your success will last. As Mark Cuban put it, “It is easier to become successful than it is to stay that way.”

Some marijuana business owners are so busy that they don’t have time to talk, and worse yet, they don’t think they need to listen. Life is good. They are busy. What happens when the party ends? Or when things get more competitive? Change is the major driving force within the marijuana industry. Be prepared for change.

Finally, huge kudos to all the speakers and this show who have taken time out of their busy lives to inspire a new generation of marijuana business hopefuls. The speakers at this convention are knowledgeable, caring and have done a superb job of sharing their experiences within the industry. This convention is invaluable to anyone who is interested in getting into the marijuana industry. If you already own a marijuana industry business, you should be here too. The next Marijuana Business Conference & Expo will held in May 2015 in Chicago. Check out www.mmjbusinessdaily.com for more information.

I am grateful for business mentors like Ben Cohen. It was amazing that this man, who is way more successful than anyone in the room, would take his time to give back to me today. Thank you, Ben!

Learn more about Ben and Jerry’s business values. It might just inspire you to do something that makes a difference in the world. That is a pretty admirable business goal.